The temperature below which materials, in laboratory tests at least, are brittle, and above which they are ductile. Body-centred cubic transition metals (such as ferritic steels) are brittle below temperatures of about 0.1 Tm and non-metals and intermetallic compounds below 0.5 Tm where Tm is the absolute melting point. Face-centre cubic materials (such as Austenitic) and alloys usually do not become brittle with decreasing temperature.

The figure shows a typical form of the transition-temperature curve for plain carbon steel, obtained by measuring the energy absorbed, Cv, by fracture in a Charpy V notch test. (The actual range of values of Cv and temperature will depend on carbon content.) 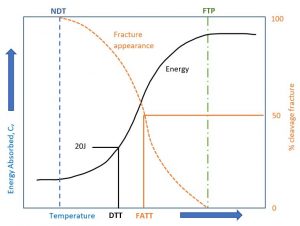 In the transition from brittle to ductile, the appearance of the fracture surface changes from cleavage to fibrous. For the selection of material in which brittle fracture does not occur at elastic stress levels, there is no single criterion for the DBTT.

In the selection of many low strength-steels, a ductility transition temperature (DTT) defined by Cv equalling 20 Joules is used. Experience shows that brittle fracture does not initiate above that temperature. The DBTT and the energy absorbed by a ductile fracture in the upper shelf region are sensitive to changes in the microstructure. For example, the former is increased, and the latter is decreased by radiation damage in ferritic steels.

The API 510, API 570 and API 653 Body of Knowledge cover the requirements of impact testing.  On our training courses, we like to give a thorough insight into the reasons why an inspector is taking the time and effort to review impact test exceptions, and how to determine when impact tests are required by the construction code.