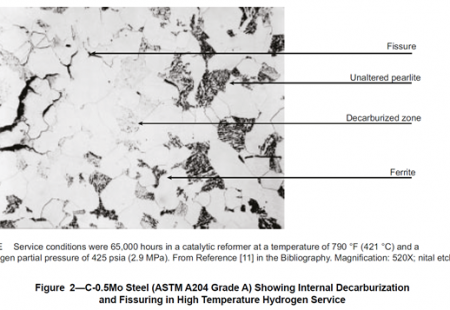 Covered extensively in our API 571 Training Course, we’re often asked about HTHA. When carbon steel is used to manufacture pressure equipment for hydrogen-containing (gaseous or liquid, even when it is a constituent portion of a fluid) service, the service conditions should be limited to avoid High-Temperature Hydrogen Attack (HTHA). This is when the material structure is attacked over time by this degradation mechanism. The effect is most noticeable in welds and other strained regions, and it’s most noticeable when welds aren’t post-weld heat-treated, PWHT).

The action of hydrogen on carbon steel and its alloys has been recognised for some time, with atomic hydrogen entering the microstructure of the steel and reacting with the carbon present to produce bigger methane molecules at elevated temperatures and pressures. This process continues, with hydrogen entering deeper into the steel structure, causing tiny pockets of methane to combine over time, causing fissuring and eventually fracture development.

Even at high pressures, gaseous molecular hydrogen does not readily permeate steel at normal atmospheric temperatures. Therefore, the standard material for cylinders used to transport hydrogen at pressures of 2000 psi is carbon steel (14 MPa). Many post-weld heat-treated carbon steel pressure vessels have been utilised in continuous operation at pressures up to 10,000 psi (69 MPa) and temperatures up to 430 degrees Fahrenheit (221 degrees Celsius). Highly strained carbon steels and hardened steels, on the other hand, have failed due to hydrogen embrittlement under the same conditions.

For carbon steel produced in accordance with the ASME Boiler and Pressure Vessel Code, the recommended maximum hydrogen partial pressure at atmospheric temperature is 13,000 psia (90 MPa). Under this pressure, carbon steel equipment has performed admirably. However, there is relatively little operating and experimental data available above this pressure. Using an austenitic stainless steel liner with venting in the shell should be considered if facilities operate at hydrogen partial pressures of more than 13,000 psia (90 MPa).

When molecular hydrogen dissociates into atomic hydrogen at high temperatures, it may easily infiltrate and spread through steel. The diffusion of hydrogen in steel is accelerated in these conditions. As stated already, hydrogen reacts with the carbon in steel to induce either surface or internal decarburisation, fissuring and cracking. High-temperature hydrogen attack (HTHA) is a type of hydrogen damage. API 571 is a fantastic document detailing the various damage mechanisms found in the refining industry. If you want to learn more about damage mechanisms and materials, our online API 571 training covers them all. 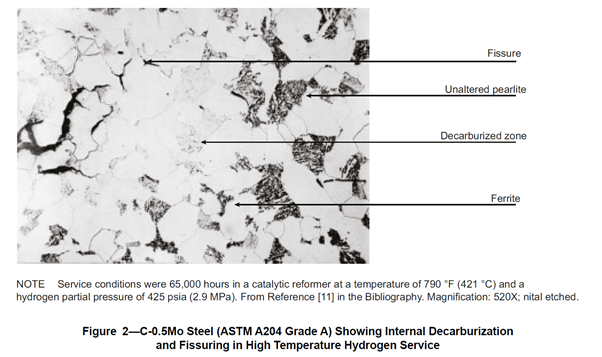 The problem prompted the creation of curves for several carbon steel alloys, which were plotted against temperature and hydrogen partial pressure axes. The American Petroleum Institute’s (API) Recommended Practice 941 describes these ‘Nelson’ curves in detail. The curves define limit conditions for various carbon and alloy steel grades when exposure to unfavourable circumstances above the curve causes HTHA effects on the microstructure.

The US Chemical Safety and Hazard Investigation Board (CSB) determined that HTHA was the cause of the catastrophic heat exchanger shell rupture that killed seven workers at the Tesoro Anacortes refinery in the United States in 2010. The heat exchanger, according to CSB, was operating well below the appropriate Nelson curve at the time. API introduced a curve for non-PWHT carbon steel in the 8th version of API RP 941 issued in February 2016, responding to the CSB findings. However, CSB believed that this did not go far enough, and in their August 2016 Safety Alert, in addition to stating that operators should identify vulnerable equipment and verify operating conditions, they also said that operators should:

‘Replace carbon steel process equipment that operates above 400°F and greater than 50 psia hydrogen partial pressure with inherently safer materials, such as steels with higher chromium and molybdenum content,’ and

‘Use inherently safer materials, such as steels with higher chromium and molybdenum content.’

CSB’s temperature and pressure requirements differ significantly from those stated in the ‘Nelson’ curves. The Health and Safety Executive (HSE) commissioned independent study work with TWI Ltd due to these disagreements and evaluated the relative validity of the CSB and API perspectives.

Two workstreams were started: one to review the HTHA mechanism and progression, the underlying material used to construct the ‘Nelson’ curves, and the other to assess the effectiveness of current non-destructive testing (NDT) methodologies to identify HTHA. 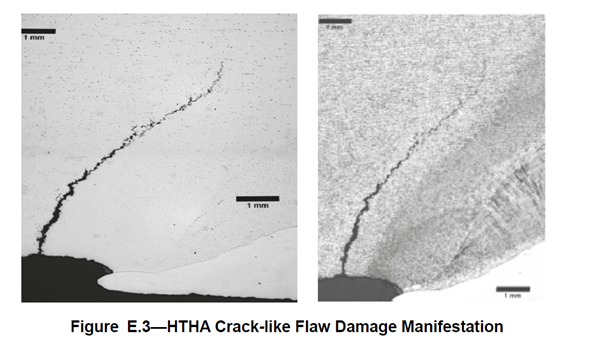 Both workstreams included a study of scholarly articles and consultation with third parties and end-users; therefore, they are considered authoritative. The reports can be obtained from the HSE website free of charge. These are;

-RR1134 – Maintaining the integrity of a process plant vulnerable to hydrogen attack at high temperatures. Part 2 focuses on the elements that influence carbon steel.

In light of the independent reports, HSE agrees with the CSB that, when HTHA is credible, inherently safer materials should be used – this is consistent with the hierarchal approach to risk management and will apply to new or replacement equipment. For example, the Nelson curves can be used to assist in defining a safe operating envelope for steels in hydrogen service, and API 941 8th Edition can be considered “applicable good practice” for existing facilities. On the other hand, the curves should be used with caution, and their application is contingent on several aspects that should be considered when assessing risk and devising a management strategy:

– Data used to map process conditions must be accurate, taking into account hot spots and other factors;

–  The curves should not be viewed as a ‘no attack’ line below which the threat of HTHA is eliminated — operating near to but below the curves still carries some risk;

–  Time of exposure is another aspect not yet considered in the curves. The time variable is expected to be introduced into future editions of RP 941. Furthermore, operators should be mindful that if their understanding of the mechanism improves, the curves are likely to evolve further, resulting in more constraints.

–  The standard and curves should be used with caution, especially when the consequences of failure could result in a serious accident. Higher levels of scrutiny, involving more frequent examination and testing, should be applied as you get closer to the appropriate curve.

–  Equipment at risk of HTHA should be appropriately installed and maintained to reduce the applied stress. Pipework, for example, should be supported per a design code such as ASME B31.3.

– NDT is constantly evolving, and detecting HTHA currently necessitates the use of complementary, verified approaches. The damage mechanism is challenging to identify in its early stages. Unless newer, more advanced procedures are applied at the right moment, it may already threaten integrity when it is discovered.

What to do now?

Operators who have HTHA-susceptible equipment should take the following precautions:

– Operators should use elimination, prevention, control, and mitigation in a hierarchical order. This would include installing equipment with enhanced metallurgy (e.g., alloyed with chromium and molybdenum) in new installations or when equipment is changed so that the plant is more resistant to assault. Operating at a lower temperature and/or hydrogen partial pressure, on the other hand, would lessen the risk.

– The restrictions established by the ‘Nelson’ curves in the most recent edition of API RP941 should be followed by operators. Continued operation over the material’s applicable curve, or a significant deviation from it, is unacceptable and may result in enforcement. This also applies to curves that have been altered or eliminated due to industry experience. Operators should plan for replacement with a higher grade of material and provide a short-term warranty of fitness for service in such situations.

–  Operators should take a risk-based approach, with more conservative estimates based on proximity to the relevant curve, the age of the installation, and uncertainties such as missing historical process data, the amount and quality of PWHT, and the limitations of NDT techniques, and so on. The risk of HTHA-related failure should remain ALARP.

–  Operators should be equipped with enough instrumentation to state the worst-case process circumstances accurately. Excursions outside of a permitted operating environment, such as excessive temperature and/or hydrogen partial pressure, should be discussed with a competent person as soon as possible, and the potential harm from HTHA assessed.

–  One of the API RP 941 Annex G assessment routes should be used when dealing with liquid service, whether continuous or mixed with vapour.